Seeing WILD Life…Who Is Watching Whom? 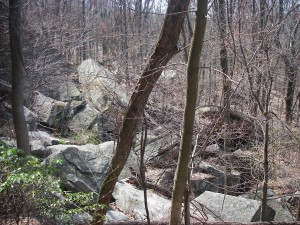 Winter has come and gone, and spring is clearly unfolding: the birdsong, the wildflowers, the bursting of shoots braking through the Earth’s surface in fertile ground, the trees leafing out, the warmer days as frogs sing, and then in the spring, showers are coming as the ice melts off the mountains, bringing it down through the rivers. It’s a powerful time of change.

My daughter and I–with binoculars in hand and our favorite walking stick, backpack filled with food, water and a couple of field guides, map and first aid kit–venture into the forest, as the sun rises, with a goal of seeing wildlife and not being seen. We move quietly through the deep forest, moving like a ghost, invisible as best we can while using the Indian sign language we have been practicing.

We are so blessed to be in the middle of a magical place with such a rich diversity as we are in southern New England…a world where the boreal forest and the northern forest meet, giving us the best place to be immersed in nature. The boreal forest, also known as “the spruce-moose forest,” has mainly evergreen trees and a few select hardwoods like poplar, paper birch, tamarack and others. The northern hardwoods have such a vast amount of trees like yellow birch, sugar maple, American beech, eastern hemlock, white pine, northern red oak, cherry, and those are just a few—there are many more.

As we trek deeper into the forest, we notice the dense canopy not letting in much sunlight as the sun rises out of the east, giving us a sense of direction, but our awareness tunes into a subtle change, and as we enter, there is more light shining down on us than just a minute earlier. This is a track on a large scale that is affecting how much light which helps to make a more rich forest in vegetation and brings with it many animals and birds and the like. With our senses honed, there are signs of the animals all around us. We notice claw marks and bites on trees, stunted growth where it looks like a nursery of Japanese bonsai trees, and when we look down in the leaf litter, there are many footfalls showing worn-in paths on the forest floor, weaving in and out of the cliffs.

Passing through different habitats, we see the many deciduous leaves and all the light that shines creates a dappled look under our feet and in the area between the wetland and the cliffs. There is a lot of feeding sign called browse (little 45-degree angle cuts), taking the end of the branch clean off, almost like clippers. 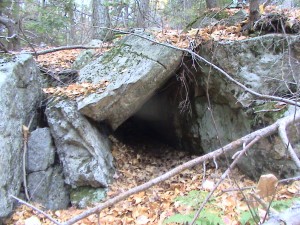 As we expand our awareness to the area high up on the cliff, we see a good hiding place opposite of the spot we want to watch. Scanning for signs of movement, we hope to get a glance of this very elusive animal who chooses the south-facing, hard-to-access areas in the cliffs. We have already done our research; we know this animal is crepuscular, which means it is active at twilight hours (dawn and dusk). It is diurnal (day) and nocturnal (night). 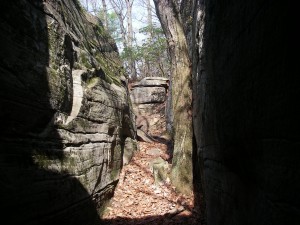 Its primary food source has left sign with the angled cut that we found earlier, so we know there is a feeding area in close view. One of the traits of this animal is the ability to be motionless for long periods; even in winter, being able to lay in the snow where you can find a sphinx-like “hunting bed” while it waits to ambush its prey. To discover this body print melted out from the heat that is generated while it remains still as a shadow is inspiring! As we get down low, we find sections of hair frozen to the ice; however this time of year, you want to look for “resting beds;” places where you can make out where it has been laying down, usually under a rock overhang on a pile of leaves insulating from the ground. 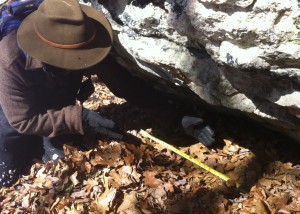 The forest is so quiet. My daughter and I take turns to scan the cliffs with our glasses. We have been watching, quietly, for almost an hour and a half. We know that patience always pays off. We also know that this animal has a very small heart and it travels a very short range compared to others of its size. By knowing this, we also could watch it hunt as it stalks its prey since it is primarily a carnivore.

While looking near the top where we have been looking all morning, in the best rays of light, we see movement–a very camouflaged tawny color with dark shades and beautiful markings, big eyes and graceful movement as we watch it stretch basking in the suns glow. It has been there all this time…watching us watching for her. So who’s watching whom? While studying us, perhaps, she senses we are not a threat.

It is time to hunt. Her preferred prey, the rabbit, helps to sustain her but also helps raising her kittens. If you haven’t guessed by now, the mystery animal is the bobcat. 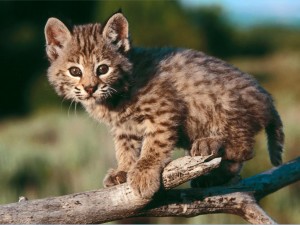 As we watch our cat in her natural rhythm, we are excited because we may be able to watch her hunt. Earlier we mentioned how she lies in wait in “hunting beds.” Once the prey is close enough, there is an explosion of energy–a POUNCE! From her ambush spot, bursting forth after the rabbit who has zigzagging motion to avoid capture. There is a very small window of time because she needs to not burn too much energy; if the hunt lasts longer than just minutes, she will stop rest, find another spot and start again and continue that cycle.

This bobcat needs to eat and feed her new kittens, and when she has the rabbit, she will take it to a place close by to hide it and take parts of the animal and “cache” (cover and save for later) the rest, using her front paws very much the same as our house cats. She will travel back and forth to feed her young if she has gotten a good amount of food. She will continue to hunt this area because of the success.

Thanks for joining us on our adventure into the outdoors.

Until next time happy trails…