In the Greenfield Recorder (April 2017) by Andy Castillo, Recorder Staff

CONWAY — Wind whispered through white pine trunks in a glade not far from a clearing where Earthwork Programs’ campers built a tarp wind break in front of a smoking camp fire.

Seated on logs around the fire, a few others hammered knives into small branches — a technique called batoning — splitting them into smaller pieces, to be carved smooth and smoldered into coal-burned spoons.

…read more or click screenshot below to watch video… 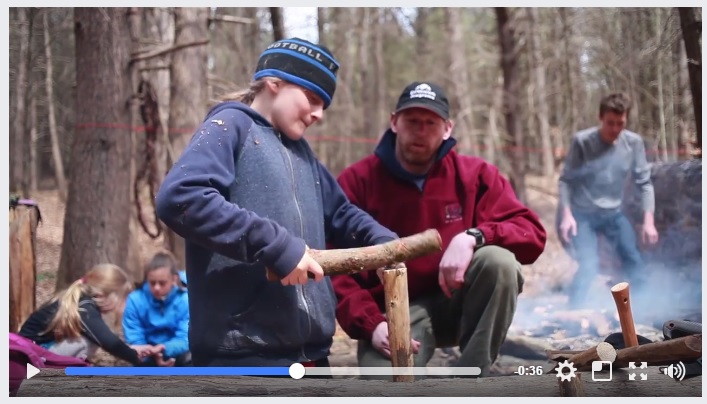 “We made cool walking sticks, and we carved them ourselves” ~ A Wilderness Survival Vacation Program Participant

During the Summer of 2014, Earthwork Programs Summer Camps were visited by a few local newspapers:

* And together, Fran and Tom, published this article in the Recorder on August 30, 2014: Learning naturally: Nature programs take the classroom outside

In January 2010, The Republican talked with Frank about Emergency Survival and Self-Sufficiency Workshops

Channel abc40 (Springfield) visited At Home in the Woods 2009 and videotaped a day at camp.

Most Important for Your Emergency Preparedness Plan: You’ll Need This within Your First 3 Days or Sooner May 5th, 2020