We’re so excited to share this article that was recently in the Daily Hampshire Gazette!

We offer thanks to Carol and Greta for coming out and capturing the magic of what we do (which we do in ALL our Programs–Summer Camps, Homeschool, Weekends of Workshops)! 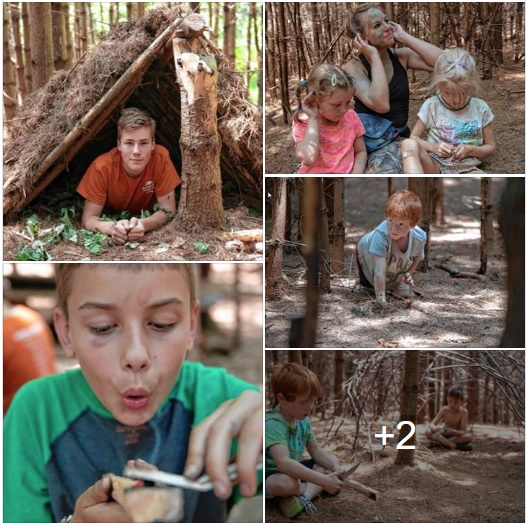 CONWAY — On a recent Thursday evening, 13-year-old Emmet Eichacker slept in the woods under an A-frame shelter he constructed from branches and twigs, just large enough for one person.

Sleeping on the ground outside might not sound comfortable, but Eichacker was well-rested the next day. In fact, he said, “I overslept.”

Eichacker is a leader in training with “At Home in the Woods,” a youth day camp from Earthwork Programs. As part of that training, he spent one night in the wooded area where the camp is held on Route 116 in Conway. Earthwork offers wilderness skills training for children, adults and families. It also puts on expeditions to places like Alaska and workshops on everything from animal tracking to medicinal plants.

On a recent Friday afternoon at the youth program, the campers’ “home” was in a small clearing inside a wooded section of the camp. There, kids climbed trees, carved wood, crept through the woods and wore dirt and clay as camouflage.

Tree branches served as makeshift hooks for water bottles and backpacks to dangle from. Nearby, there was a small circular shelter made from sticks in addition to Eichacker’s triangular one.

“This is like a little home away from home,” said Frank Grindrod, the director and founder of Earthwork Programs.

The weeklong youth camp, offered most weeks in the summer, teaches outdoors skills, including how to carve with a knife, build a fire, make utensils and identify wild edible plants.

In Grindrod’s outstretched hand, he held a branch with red berries on it. “This right here is a chokecherry,” he said, popping one in his mouth. The bitter berries were gathered from the forest.

“Fox walking” is a favorite skill for many campers. “It’s a stealthy way to move through the woods,” explained Serena Rooke, camp director. One walks slowly and feels the ground before putting their foot down, Rooke said, “so you’re not stepping on a stick and cracking it.”

Creeping through the forest like this, “Their brain chemistry and body changes,” Grindrod said, “Then they don’t want to be on their phone.”

Reconnecting with nature at Earthwork is a central goal. “It’s only recently that we’ve been disconnected,” he said.

“With all the anxiety and depression and things that kids are dealing with,” Grindrod said, “it totally affects them … They just become more connected with themselves.”

Building shelters like Eichacker’s is another skill campers learn, though they do not stay overnight. It’s Eichacker’s fourth year involved in programs at Earthwork, including camps and home school programs during the school year. He keeps coming back for a reason. “I get to be outside and learn skills you don’t usually get to normally learn,” he said.

Eichacker’s lives in Warren, about an hour from Conway. Joyce Eichacker, his mother, thinks the camp has taught him useful outdoors skills, and also everyday ones.

“He has learned the gift of patience. Everything about bushcraft requires a little bit of patience,” she said. “To light a fire with a bow drill,” she said, referencing a wood tool that uses friction to start a fire, “It’s not easy.”

For Grindrod too, the camp’s goals go beyond outdoors skills.

“EarthWork is really about mentoring people through the challenges in life … in a way that basically develops self-reliance and self-worth and respect for the environment and themselves,” he said.

Not a ‘normal camp’

Nearly 20 years ago, Grindrod started Earthwork Programs. “I thought I could add value to people’s lives. And I could help the earth,” he recalled.

His interest in nature started early in life. Growing up, Grindrod’s father would tell him a story about his late aunt, who would hand-feed birds. “That’s impossible. They’d be afraid of her,” he recalled thinking. “Then I was like, ‘OK, well what if it is true?’”

Around age 9, he started to test it and spend more time outside. Eventually, the birds did eat from his hand. “Then I had a fever for just finding every possible way to connect with nature,” he said.

He worked at a wilderness camp for five years, starting as an intern and working his way to assistant director. He also trained with Tom Brown, a well-known naturalist and tracker. Then, Grindrod decided to start his own camp, Earthwork.

Now, he’s publishing a book about how to start a wilderness camp with Storey Publishing, a company in North Adams, that is slated for release in the fall.

In addition to its summer youth camp, which costs between $350 and $410 for the week, Earthwork offers a Friday outdoors program for homeschoolers and themed weekends of programming for families. Adults can take workshops like “The Art of Fire” and “The Skill of the Knife.” The organization also takes people on outdoors trips. Grindrod recently got back from leading an expedition in Alaska, for example, where he taught leadership training.

At the “home” in the woods earlier this summer, a group of young people sat with their knives carving wooden spoons while their instructors stood by watching. Liam Wallace, an 11-year-old leader in training, explained that coals from the fire are used to burn the wood and then it’s carved with a knife. He made a wooden spoon at Earthwork and has used it at home for soup, he said

Wallace has been coming to the camp for several years. “You get to do things you wouldn’t at a normal camp,” he said.

Jude Dan, 7, also worked diligently on his spoon with a knife. He said he’s itching to go on a backpacking trip and his newfound carving skills would come in handy.

Did he like the outdoors before? “Barely,” Bonham said. Even at the end of the week, he said, “I don’t like camping, I like staying in hotels.”

As Grindrod sees it, the adage, “You can lead a horse to water but you can’t make it drink” applies to outdoor education. “One of the things about being a mentor is that you salt the oats through storytelling and inspiring experiences and sensory involvement and developing awareness to where all the sudden, they want to drink — they want to learn about this plant … they want to learn more about the story of this particular animal.”

That seemed to be working. Sitting on the ground focused on their carvings, their hands sooty and faces dirty with camouflage, the campers looked happy.

Greta Jochem can be reached at gjochem@gazettenet.com.